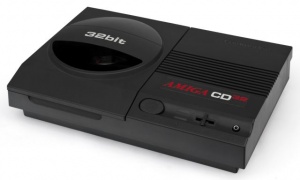 The Amiga is a line of home computers and games consoles produced by Commodore Business Machines between 1985 and 1994. The machines fast operating system, smooth multitasking and great multimedia capabilities earned it a devoted userbase throughout its lifespan and through to today. The Amiga was most successful in Europe, meaning that many games are PAL only.

There are various models of the Amiga computers with different specs and capabilities. Virtually all the models (with the exception of the stock CD32 console which is initially limited to S-Video) will output 15khz RGB. Some higher end models can output 31khz video in various resolutions too, though the majority of games only support 15khz.

Image generally has no problems on the XRGB-3. Remember PAL systems must be connected to GAME IN or other RGB connector and that in B1 mode a 50hz compatible display device must be used. Running games in 60hz mode on a PAL Amiga is incompatible with some displays due to the out of spec vertical refresh generated by the Amiga's video clock.

For a flicker free interlace Workbench, set the Mini to output at least 720p. Use AUTO_SCALER set to Video. For games, remember that scanlines will only work on PAL 288p titles if you set the Mini to output at 576p. If you run games in 60hz mode on a PAL Amiga, you may experience some stutter due to the out of spec vertical refresh generated by the Amiga's video clock.

For games, generally no special settings are required.

If you're interested in using the Amiga's OS (Workbench) the link below (OSSC discussion on EAB) provides some optimal timings for the various resolutions the Amiga is capable of outputting.