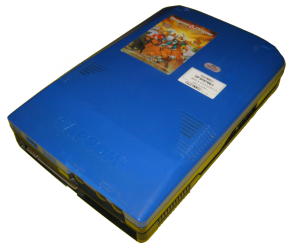 Capcom System II is an arcade platform developed and used by Capcom. It consists of two boards, named A and B. The A board is the base of the system, and contains the CPU, DSPs, JAMMA connector, a JAMMA+ harness and stereo RCA connectors for use with a QSound amplifier. The B board goes on top using four connectors and holds all the game data.

There are two kind of connectors in the boards, these make the games physically incompatible between certain regions. The boards are colored to reflect their region, and thus their compatibility in general terms. However, there are boards that have been officially adapted for a different region than the one identified by the color.

There are also black metal boards, which are a complete system and thus, they have no A and B parts.

The JAMMA+ harness found in CPS-2 boards is 34 pins in two rows. It is multipurpose and teh game might use it for different input options. It is most commonly used as a Kick harness, extending the JAMMA 3 buttons per player to 6 buttons, and is commonly used in fighting games.

One thing to note is that JAMMA pins c and 25 are also used for the fourth button of player 2 and 1 respectively in both Dungeons & Dragons games.

It can also be used for and 3rd and even 4th player, Alien Vs. Predator and the Dungeons & Dragons games use the port for this purpose.

The volume up and down buttons in the harness have the same effect as the ones in the board.

The harness is compatible with the Sega Naomi I/O board by Capcom and CPS-3 games.

There are two ways to deal with this problem: preventing it by changing the battery in regular intervals, a five year period is usually recommended; and after a board is dead, they can be Phoenixed by CPS Shock.

Phoenixing a board is a controversial matter for some, and a convenience to others. It is argued that a Phoenix board is technically a bootleg and it certainly is since the program ROMs are not the original ones, even if all the rest is kept identical. It is convenient for others since a Phoenixed board doesn't need maintenance by changing the battery and spending time and money every few years, plus you eliminate the risk of a battery leakage. As a plus a Phoenix board has a menu that allows the region of the board to be changed, giving access to different languages and region specific extras in a few cases.

The image on the XRGB-2 has no trouble at all and is shown entirely, but is shifted to the right. It can be centered by setting H_POS to a value of 2.

All this information applies to the GAME IN port only, using RGB21. As usual with arcade boards, you'll need to set the 220 ohm setting or adjust your potentiometers if your SuperGUN has the controls.

CPS-2 also presents slight distortion on the top 18 lines. To fix this set AFC to manual and AFC level to 3. LPF might also be needed but it commonly isn't. This works on B0 and B1 mode, a reboot of the XRGB-3 might be needed after setting AFC level.

Here are pictures detailing the distortion on the top lines before and after adjusting AFC level.

No special settings are required.

Since the platform is basically the same with minor revisions and since a considerable number of games have been tested, it can be safely assumed that they are valid across all boards.