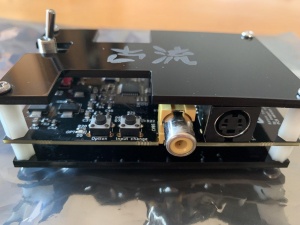 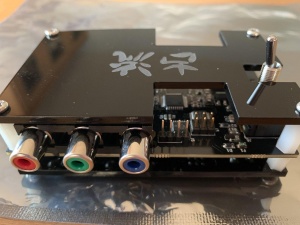 Designed particularly with OSSC users in mind, Koryuu can be connected to the AV2 input on the OSSC to add composite and S-video compatibility. It can also be used as a general purpose transcoder for CRT displays.

The device is compatible with many flat panel displays too, but since the Koryuu does not upscale or deinterlace, it is usually best to combine it with a scaler or line doubler, such as an OSSC, in this situation.

Currently, the device has open source firmware. The PCB, case design and detailed schematics are not public at the moment, but sufficient technical information required for firmware development will be made available. There is an intention to eventually make the design files public, but the time frame has not been decided on yet.

Pre-assembled units and accessories are available from VideoGamePerfection (EU).

Koryuu uses the same 5 volt power supply as OSSC. The specifications are as follows:- 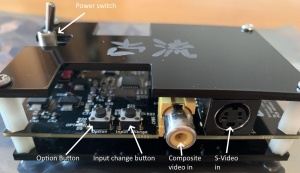 Inputs and switches on the front of the Koryuu 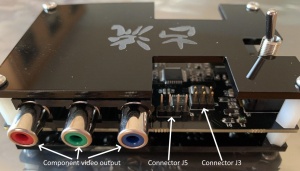 Output and additional I/O on the back of the Koryuu

Koryuu has two AV inputs. The currently selected input can be selected by pressing the input change button, which is the button on the right of the unit. The input signal can be 240/288p or 480/576i (NTSC/PAL).

The yellow RCA connector on the front of the unit on the left hand side accepts a standard composite video (CVBS) signal suppled by a single RCA cable. Both PAL and NTSC formats are supported.

The device has two buttons on the front of the unit and a power switch. The power switch simply toggles the unit off and on.

By pressing the input change button (see the image above) the user can cycle through the active inputs. There are currently four input modes:-

7.5 IRE mode may be required for certain sources (e.g video cassettes). If the picture is too light, try 7.5 IRE mode.

The option button is for future firmware updates and features and as of firmware 1.0 it applies a smoothing/blur filter however this effect is not correctly implemented. 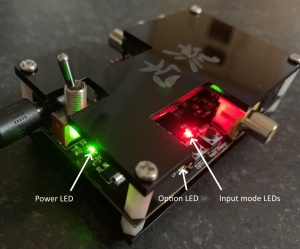 The Koryuu Transcoder has four LED (light emitting diodes) that illuminate to indicate various modes of operation. In the picture above we can see the location of these LEDs.

Power LED – This LED will illuminate green whenever the Koryuu is powered on.

Option LED – This LED will illuminate red whenever the Koryuu’s option mode is enabled. This is expected to be utilised in future firmware revisions.

J5 – Serial connector for capturing debugging information and development. J5 is located just to the right of the component video output when viewing the unit from behind.

J3 – This connector can be used with suitable USP ASP programmers to load new firmware (see the picture in the firmware upgrade section for pin orientation). The pin-out for this connector is as follows.

This can cause compatibility issues with the OSSC or other undesirable effects on CRT displays. Usually, power cycling the unit or switching to a different input will cure the problem.

The issue is still under investigation and will hopefully be resolved in a future firmware update.

The current release firmware is version 1.0 and comes pre-flashed on all Koryuu’s sold.

New firmware versions can be downloaded from the page here.

To program new firmware, a USB ASP programmer is required.

Note - Firmware needs to have been flashed before the unit is functional. If powered up without firmware, only the PWR LED next to the power switch will light up. This will simply indicate that the unit is receiving power, but tells nothing else. All units sold by VideoGamePerfection.com come with firmware pre-flashed.

To avoid damage, the programmer must be set at 5V logic high level, with no power supplied to the Koryuu by the programmer (target mode off). These settings are usually configurable through jumpers on the programmer itself. The exact location varies depending on the model. Usually the jumpers are labeled according to their function. Sometimes there is a need to open up the casing of the programmer to access these jumpers.

1. Download and install the Khazama AVR Programmer software to your PC

2. Connect the USB ASP programmer to the PC

3. If you have never used the programmer on your PC before, install the drivers from this link. If you need help with this, see this page. Scroll down to the heading "Best & Easy method" and follow the instructions from there

4. Connect the ribbon cable and adapter to the USB ASP

5. Connect the other end of the ribbon cable to the Koryuu transcoder via the header shown in the picture below. Pin 2 is voltage or VCC so orientate the AVRisp accordingly. Double check this before proceeding 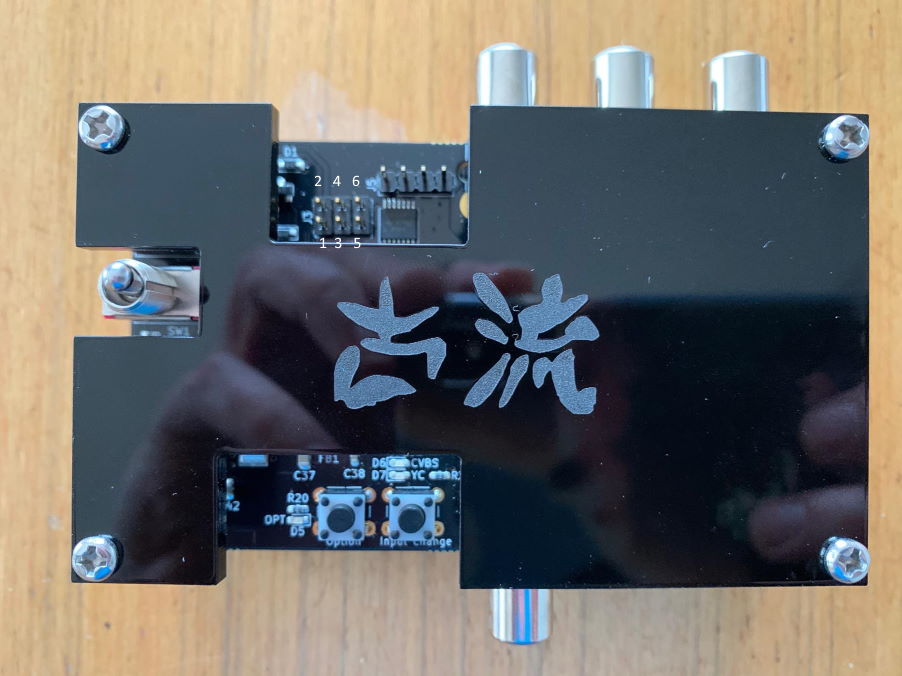 6. Check again the orientation of the ribbon cable. Pin 2 is voltage and must match pin 2 as shown on the picture above.

7. Power on the Koryuu transcoder.

8. Start the Khazama AVR Programmer software. The program window shown below should appear. 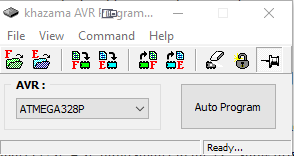 9. On the drop down box under "AVR:" ensure that the correct AVR is selected. ATMEGA328P is the AVR in our recommended programmer.

10. Open the file menu and choose "Load FLASH file to buffer". Using the standard Windows file requester, navigate to the hex file containing the firmware, click on it and choose "Open".

11. Open the command menu and choose "Write flash buffer to chip". A successful programming should only take a second or two.

Note – On some PCs you may see a message that says "Error setting USBASP ISP Clock". This can safely be ignored (just click on OK to dismiss it).

The Koryuu is now updated.

Version 1.1-RC1 – Unofficial Release candidate 1 - Settings created by a newer firmware version will not be automagically overwritten on startup.

Version 1.1-RC3 – Unofficial Release candidate 3 - Fully setup encoder chip when the currently selected input turns from on to off or vice versa.