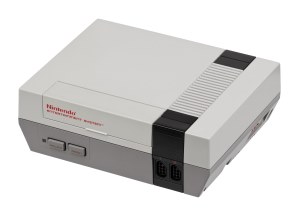 The Nintendo Entertainment System (commonly abbreviated as NES) is an 8-bit home video game console that was developed and manufactured by Nintendo. The console is known as the Family Computer or Famicom in Japan.

The console was phenomenally successful especially in Japan and the USA and was on sale in one form or another for almost twenty years.

Amongst retro-gamers, the NES is notorious for only offering composite video output. However, there are both RGB and HDMI mods now available for the console.

The front loading NES as pictured above was sold in America and Europe. This model suffers from a design flaw that causes the cartridge connector to wear out and make poor contact with the game cartridge. Several solutions to this problem exist, including the "blinking light win" kits.

The Famicom, as sold in Japan, looks somewhat different from this and has a top-loading cartridge slot.

In Japan, Nintendo also released an add-on called the Famicom Disc System. This was intended to provide a more affordable way of distributing game software. The Sharp Famicom Twin includes this add-on built in.

Various clones of the system exist too. For more information, see the article here.

US Front loader with NESRGB (tested on OSSC).

Since the NES outputs only composite, you must use a transcoder or an RGB modded console with the OSSC. The latter is highly recommended since composite video is a low quality signal and transcoding it to RGB will not overcome its inherent limitations.

Note that a basic composite to SCART breakout adapter, the ones typically bundled with older games consoles, will not work. You must use an active composite to RGB transcoder or obtain a proper RGB mod.

Once suitably converted or modded to output RGB, the NES can be used with the OSSC without any special settings required. Setting sync LPF to 33MHz may be required for best results.

The NES is compatible with the 256x240 optimal sampling mode. To use the NES in this mode, follow these steps.

3) If you get a picture, you may find it has jitter or ghosting, don't panic! Exit the Output Opt menu and then either adjust the Sampling Phase (under Sampling Opt.) or adjust the Analog Sync LPF (under Sync opt.) until the picture is perfectly clear and free of any ghosting or jitter. An analogue sync LPF setting of 10MHz instantly fixes the picture on my setup (OSSC + VP50 Pro) without causing any other issues.

4) If possible, check the aspect ratio using the Linearity test in the 240p_test_suite. You may need to put up with some slight stretching if your setup does not allow for full picture zooming/adjustment.

5) Optionally, you can now add scanlines via the Post-processing options and save these settings to a profile if desired. Note that you may need to adjust the sampling phase each time you recall the profile.

Optimal mode produces an image that is very sharp, if you prefer a slightly softer presentation you may prefer the generic mode instead.

The NES PPU (picture processing unit) has an unusual quirk that causes it to skip a tick every other frame just before first visible scanline is drawn. This results in a non-periodic hsync, which is a bad reference for any digitizer. On the OSSC, this manifests itself as a certain amount of jitter at the very top of the image. There's currently no fix for this, however since vintage CRT sets often had overscan, few games draw any relevant information in this part of the image, so in most cases you can simply use the OSSC's mask feature (Post-proc->Vertical mask) to mask out the problematic lines at the top of the image.

An theoretical universal fix would be to alter NES clocking circuitry via a hardware modification (e.g. via CPLD/MCU) so that one oscillation cycle on the uneven scanline is gated, thus stabilizing hsync period.

See the thread here for more information and examples of this issue.