The Super Nintendo, or SNES, was Nintendo’s follow up to the phenomenally successful NES console. Just as the NES is known as the Famicom in Japan, the Super Nintendo is known as the Super Famicom over in Japan too. While the SNES didn't gain the same levels of popularity as the original NES, it was still a very successful console globally, shifting nearly 50 million units worldwide.

There were two main revisions of the hardware. The first revision outputs RGB natively, while the revised Junior or Mini edition requires a RGB mod.

Later models of the SNES and all SNES/Super Famicom Junior units are known for having a slightly sharper RGB output than earlier models. Enthusiasts refer to these better models as "1 Chip", in reference to the single RGB encoder chip present on the later design motherboards. The 1 chip revision Super Nintendo/Super Famicoms are highly sought after and many gamers will go to the effort to get a SNES/Super Famicom Junior RGB modded to ensure that they are getting a unit with the very best possible quality RGB output.

No special settings are required. Using a cable wired for clean composite sync, or at least luma for sync is highly recommended.

No special settings are required. Using a cable wired for clean composite sync, or luma for sync may occasionally be required.

The following settings must be used for a stable picture with the SNES on any display.

SNES compatibility is often regarded as the Achilles heel of the OSSC. While every other system works with little or no fine-tuning, the SNES continues to cause problems on some displays.

Thus far, all computer monitors that have been tested work just fine with the SNES and OSSC, but a number of televisions do not. If your display constantly loses sync with your SNES when running via the OSSC, there's currently no simple workaround. You can chain your OSSC through a secondary video processor such as a DVDO Edge/VP50 or simply use another display.

A hardware mod for normalizing SNES 240p is under development. Technical details and status updates can be found in this thread.

A number of SNES games are compatible with the 256×240 optimal modes, though this does not apply to every title. If you try this setting and the image appears to be missing pixels, your game is probably running in the SNES' horizontal hi-res (512×240) screen mode and is therefore not compatible. 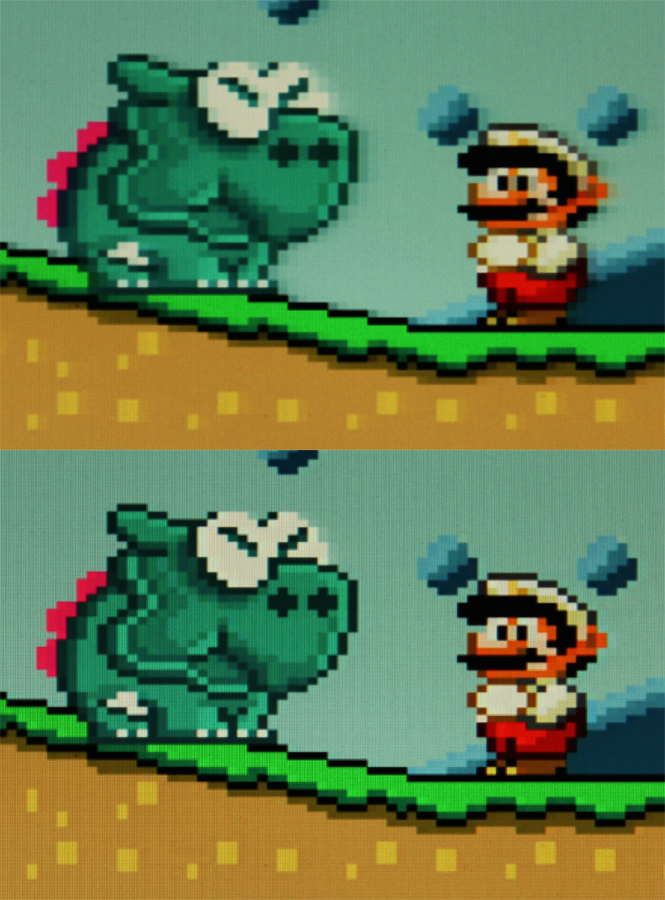 Reverse LPF is particularly effective when using the 256×240 optimal modes, but works in generic mode too.

Reverse LPF is not required for 1-chip SNES consoles.